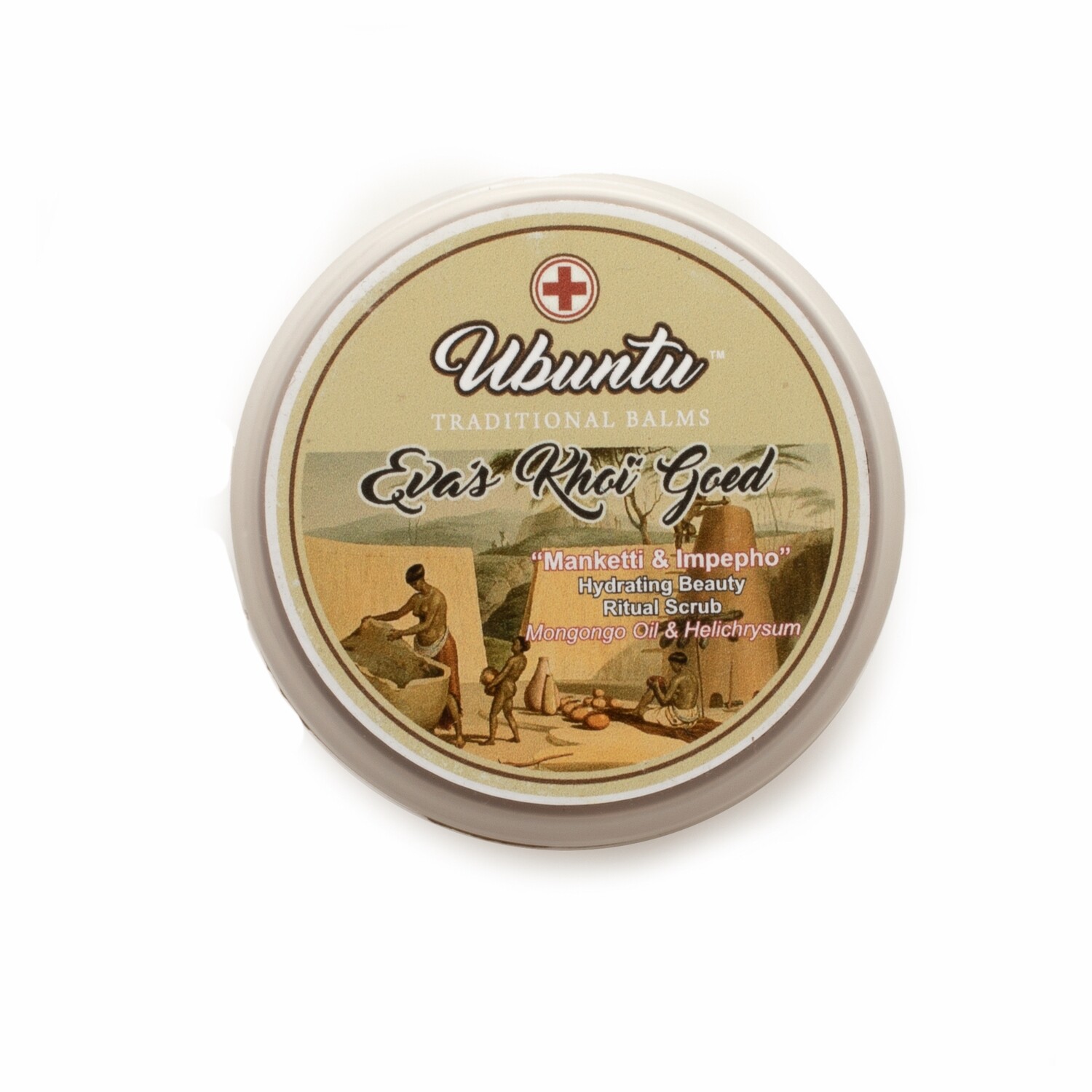 Eva's Khoi'Goed- Manketti & Impepho scrub is part of the Love African Dirt Experience. The brown sugar scrub is rejuvenating & enriched with shea butter & local Cape Honey. The scrub takes washes away all the dead cells on the body & face leaving it glowing & moisterised.

The Baobab is a native African tree, and it has been mentioned in some ancient African poetry and folklore. It is a majestic tree that has a lifespan of about 6000 years, and it is believed that spirits dwell on the inside of this tree. It is also known as the ‘Tree of life’ due to the fruits that are full of nutrients that it possesses, especially in the dry season. It can store gallons of water in its trunks; a major contributor to its oil content, and that is why elephants and other land animals chew on its barks in the dry season. Benefits of baobab oil includes Oil cleansing, Massaging, Rejuvenation of skin cells, Restoration of collagen, Skin nourishing, Eye serum, Glossy hair, Insulation, Healing, Anti-inflammation, Chapped lips.

The Fynbos used in the scrub is Helicrysum Odoratissum (Impepho) it is used in southern Africa refers to around 250 species from the genus Helichrysum. The Helichrysum species used as imphepho grow abundantly in South Africa, Swaziland and Lesotho but especially around coastal areas and the largely arid Northern Cape province. Among traditional healers, local availability is more important than a preference for a particular species.

Its traditional common name of kooigoed translates as "bedding stuff" and it is still used to provide a soft and aromatic mattress. The essential oil has been investigated for its anti-microbial, anti-oxidant, and anti-inflammatory properties. In South Africa it forms a component of traditional African medicine. The leaves and twigs are boiled and prepared as a sort of tea to soothe coughs and fever. The leaves are also applied to wounds to prevent infection, and are ceremonially burnt to produce a traditional incense.

In its ritual use, Imphepho is believed to invoke and placate the ancestors and to drive away malicious spirits; since these are regarded as common causes of illness in African traditional medicine, it is not surprising that Imphepho is a very important medicinal plant in this traditional medical field. Imphepho is traditionally used as a wound dressing. The plant has proven anti microbial properties and appears to work effectively as pain relief and as an anti-inflammatory, probably due to various volatile oils and flavanoids. The oils are said to be of great value in healing scars and acne, Imphepho is believed to stimulate cellular regeneration.

Like Berglund says "Like the spirits, the plant does not die. It lives forever. It has a fellowship with the spirits.'

Scrub small amount in hand and use with warm water to scrub in circular motion & moisterised immediately afterwards.

Save this product for later
Display prices in: ZAR